The early morning hopes of a decent seawatch were quickly dashed by fog rolling in at 0700hrs and then lingering into the afternoon. The sea did however produce 302 Common Scoters, three Black-throated Divers, 147 Sandwich Terns and a Common Tern of note.
There was little to be seen in the way of grounded migrants with just six Chiffchaffs and four Firecrests of note. A flock of four Buzzards also flew over.

We ran two "noc-mig" recorders with some very interesting results. The highlights were a couple more recordings of Stone-curlew along with one flock of Wigeon, ten flocks of Common Scoters, two Mediterranean Gulls and 62 Redwings.

At least ten Porpoises were feeding offshore and a Grey Seal was hauled out on the beach. A Weasel was seen in the trapping area.

Five Peacocks and a Comma butterfly were seen and a Painted Nomad Bee was also found. 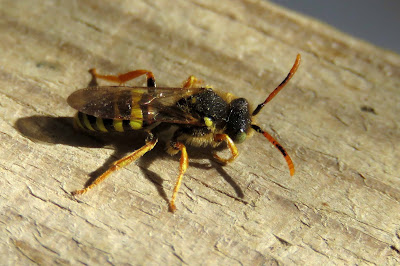 Some of the Blackthorn bushes are in full flower and attracting a few bees including this Painted Nomad Bee Nomada fucata.