A quiet day on the land although 950 Sand Martins and four Yellow Wagtail flew through and three Green Sandpipers and a juvenile Cuckoo seen at the Long Pits.. A check of the gulls feeding at the Fishing Boats proved worthwhile with a colour-ringed juvenile Caspian Gull appearing among them along with two juvenile Yellow-legged Gulls and ten Mediterranean Gulls. 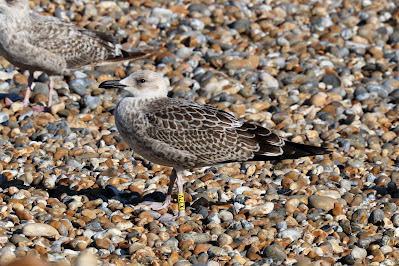 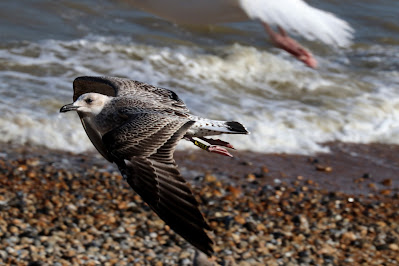 A male Lesser Emperor was seen on the Northern Long Pit.

Very quiet on the land with just a couple of Willow Warblers, a Grey Wagtail and just four Yellow Wagtails.. A few waders passed overhead including Golden Plover, Whimbrel and two Common Sandpipers. 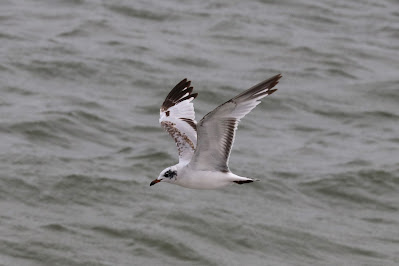 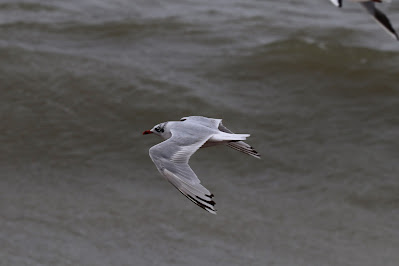 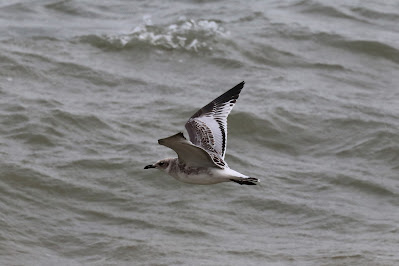 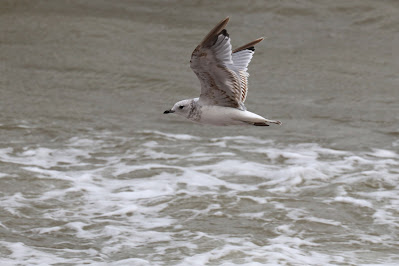 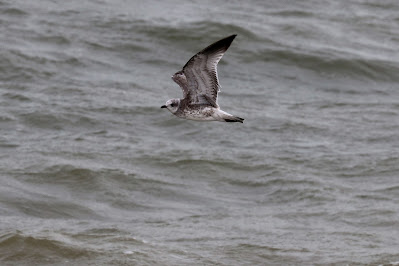 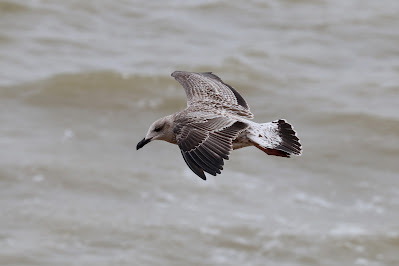 An after-dark session in the Trapping Area produced three singing Large Coneheads, 19 Sickle-bearing Bush-crickets and lots of singing Tree Crickets. On return to the Observatory an adult Mediterranean Stick-insect was found in the garden.

On a different note the lack of rain is really starting to affect the vegetation in the area badly. Brambles are being particularly hard hit with many bush dried out, brown and fruitless. Some of the Gorse bushes are turning brown and Willows, Aspens and Birches are already dropping their leaves. 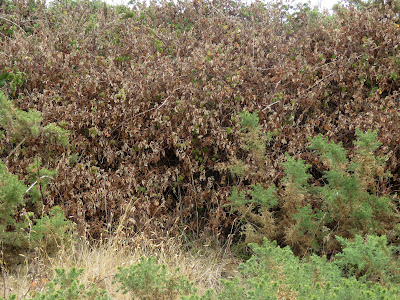 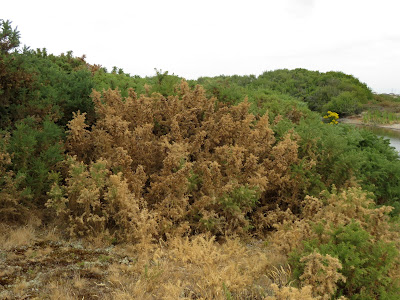 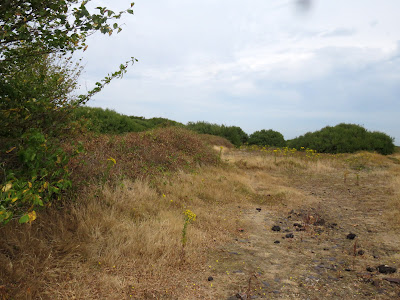 There was another small arrival of migrants on the land with 15 Willow Warblers, a Sedge Warbler and 20 Reed Warblers and the highlight of a Grasshopper Warbler. A Grey Wagtail was seen at the Sewage Works and 12 Yellow Wagtails passed overhead.

A Southern Oak Bush-cricket was found inside the Observatory.

A pair of Sparrowhawks which nested in the Trapping Area fledged three very noisy juveniles this morning.

Given the overnight conditions the moth traps were fairly disappointing with just a Bordered Straw of note.

An excellent total of 1045 Swifts passed overhead along with eight Sand Martins and six Yellow Wagtails but there was very little else on the land. There was very little movement offshore with just five Whimbrel of note but a resurgence of the Patch attracted 68 Mediterranean Gulls and 14 Yellow-legged Gulls.

Two each of Porpoise and Grey Seal were seen offshore.

The moth traps were disappointing but with a Jersey Tiger of note while four Southern Oak Bush-crickets were found around the Observatory.

A Common Treecreeper trapped in the Moat this morning was an unexpected highlight of the day. Land migrants were difficult to find but 50 Yellow Wagtails flew over. A spell of bread-throwing at the fishing boats in the afternoon produced seven juvenile Yellow-legged Gulls, 12 Mediterranean Gulls and five Turnstones. 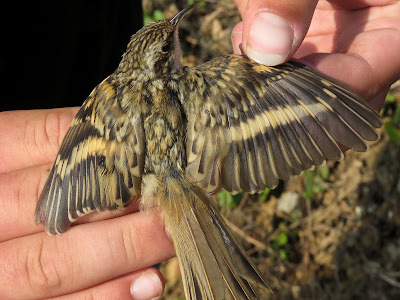 The moth traps were fairly quiet but did produce a Channel Islands Pug and a Black Arches. A Dark Crimson Underwing came to over-ripe fruit put out in the garden. A Lesser Emperor dragonfly was seen at the north end of the Long Pits.

Very quiet on the land with just six Yellow Wagtails of interest. An offering of bread at the fishing boats produced a juvenile Yellow-legged Gull and 15 Mediterranean Gulls. Two Common Sandpipers flew over after dark. A Polish colour-ringed Black-headed Gull (Yellow TJVV) ringed at Sominskie on 6th June 2020 and first seen at Dungeness on 19th October 2020 and then to 20th March 2021 and again between 11th November 2021 and 27th February 2022 reappeared back at the fishing boats today.

A Porpoise, a Grey Seal and two Common Seals were feeding offshore..

With a fresh wind blowing last night the catches were much reduced but did include this second Observatory record of Ethmia quadrillella.

A quiet day on the land but 40 Yellow Wagtails passing overhead was a significant total for the date and a Grey Wagtail also flew over. An adult Cuckoo was seen in the Moat. A flock of at least three Little Ringed Plovers flew over in the early hours and 15 Mediterranean Gulls were seen offshore.

Fortunately it was an excellent night for moths with six traps set at the Observatory and in the Trapping Area catching at least Common Lutetstring208 species. Of note were our fifth Dark Crimson Underwing of the week, a Jersey Tiger, a Bordered Straw, a Starwort, a Dog's Tooth and two Delicates. Notable pyralids included Evergestis limbata, Euzophera pinguis and our third record of Dioryctria sylvestrella. 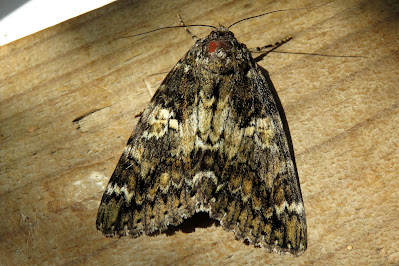 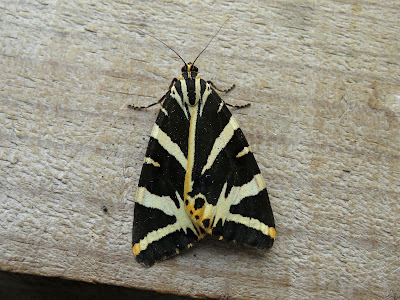 After thunderstorms overnight it was another very hot day again. Migration was limited to 12 Yellow Wagtails and 11 Mediterranean Gulls offshore. A juvenile Yellow-legged Gull came into the offerings at the fishing boats.

Moth trapping was very good again although there no major surprises and with Black Arches (ninth Observatory record) and Common Lutestring of note.

Searching for interesting orthoptera produced two late-stage nymph Large Coneheads, an adult Sickle-bearing Bush-cricket as well as a few nymphs and a few Tree Crickets. An adult example of the Mediterranean Stick-insect was found in the Observatory garden.
at 00:49

With extreme temperatures it was not surprisingly very quiet on the bird front with just 15 Mediterranean Gulls offshore of note.

With very high overnight temperatures the moth traps continue to provide plenty of note with yet another Dark Crimson Underwing, Brussels Lace, Orange Footman and a Gypsy Moth (third record from the Observatory traps).

A Southern Oak Bush-cricket was also caught in one of the traps.

Moth trapping provided plenty of interest with another Dark Crimson Underwing, (a second individual was found at Southview Cottage), a Beautiful Marbled and two Channel Islands Pugs, and also the micro Lyonetia clarkella. 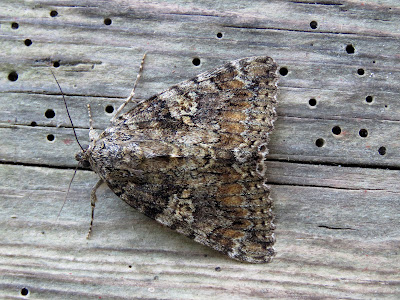 A Lesser Emperor was seen on the northern Long Pit.

Three Gadwalls flew east along the beach and two Little Egrets came in. There was a decent "Patch" for the first time in a while and among the large numbers of gulls attracted to it were 25 Mediterranean Gulls and four juvenile Yellow-legged Gulls. At least 215 Sand Martins were flying around the Point this evening while earlier in the day 19 Yellow Wagtails and a Grey Wagtail also passed overhead.

One Porpoise was feeding offshore and three Brown Hares were seen in the Desert.

The best of a fairly small moth catch was our sixth record of Barred Rivulet.

A Common Pipistrelle bat was feeding around the Observatory in the early hours and a Porpoise and a Grey Seal were feeding offshore.

The highlights from the moth traps were the "micro" Bisigna procerella and our ninth record of Plumed Fan-foot.

Although the moth traps were not that busy there was still a major surprise in the form of a superb Dark Crimson Underwing. 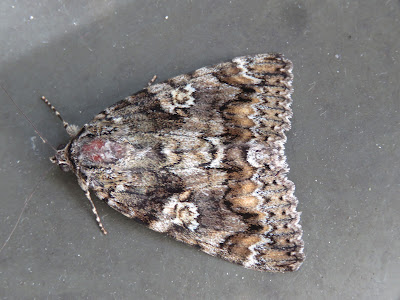 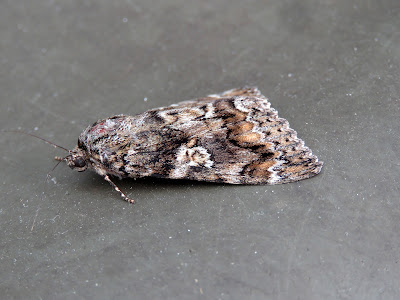 A Teal, a Whimbrel, two Dunlin passed west while 19 Mediterranean Gulls flew east and a Buzzard flew over the area. Eleven Yellow Wagtails also flew over.

Singles of Porpoise and Grey Seal were seen offshore.

The moth traps were very quiet.

Thirty Swifts passed through during the morning and three Mediterranean Gulls flew west in the evening.

Most of the morning was spent sorting through the moth traps were we ended up with a remarkable total of 178 species (plus a couple to be confirmed).  Despite the huge numbers there was actually not a great deal of migrant activity with highlights including the pyralids, Gymnancyla canella, three Evergestis limbata and six Sitochroa palealis, a Vestal, 20 Sussex Emeralds, our fifth record of Brussels Lace and our sixth record of The Fan-foot.

A Brent Goose flying east along the beach was an unusual sighting and a Whimbrel flew west. A Great Spotted Woodpecker was seen in the Trapping Area and 49 Sand Martins, 29 Swallows and a Grey Wagtail flew over.

In the evening we hosted a Butterfly Conservation meeting which involved some of the local Brownies and Guides coming to see the moths we catch with an emphasis on Sussex Emeralds. The kids are involved with a scheme to improve some local sites for Sussex Emeralds but they had never seen the actual moth before so it was great for them to see the moths they are helping to protect. 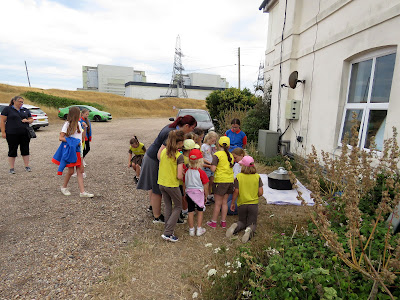 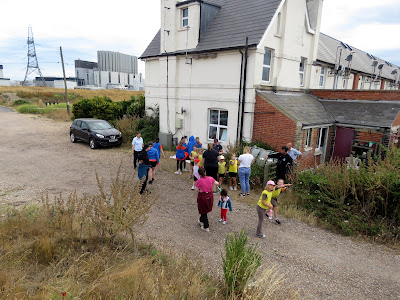 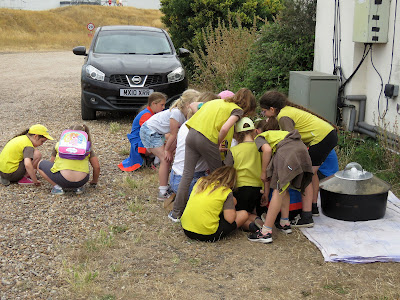 Singles of Whimbrel and Curlew and seven Yellow Wagtails overhead were about the only migrant birds to be seen in the Observatory area.

There were hundreds of moth in the traps last night but the only moths of note were an Engrailed, 13 Sussex Emeralds and a Silky Wainscot.

In very hot conditions there was very little to report in the way of birds except for the finding of two just hatched Ringed Plover chicks and another evening gathering of 550 Sand Martins at the Point.

Six Porpoises and a Grey Seal were seen offshore.

Despite good numbers of moths in the traps there was very little of note other than six Sussex Emeralds.  Two Small Red-eyed Damselflies were seen on the southern Long Pit and a sweep-netting session produced another Heath Shieldbug Legnotus picipes (this one from Lady's Bedstraw), a Rhombic Shieldbug Syromastes rhombeus, two very small Tree Cricket nymphs and six Sickle-bearing Bush-cricket nymphs.

A Bee-eater was seen over the Point from the Observatory at 0900hrs and over the next 90 minutes or so it was seen on numerous occasions but was typically highly mobile. A Marsh Harrier, 50 Swifts, four Ravens, 250 Sand Martins and three Yellow Wagtails also passed overhead and 70 Mediterranean Gulls passed offshore.

The best from the moth traps were a Small Rivulet and13 Sussex Emeralds.

A gathering of 500 Sand Martins at the Point this evening provided plenty of entertainment and while there a Little Egret came in off the sea and a second-summer Caspian Gull came in to an offering of bread. Single Grey and Yellow Wagtails flew over the Observatory during the morning. 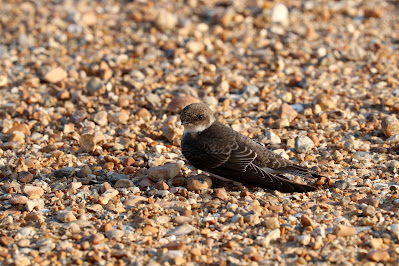 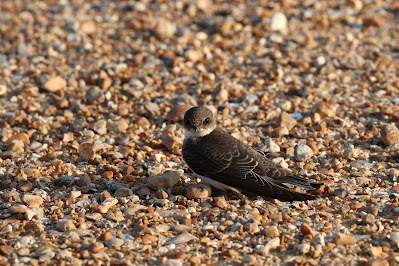 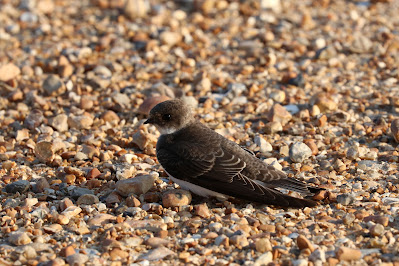 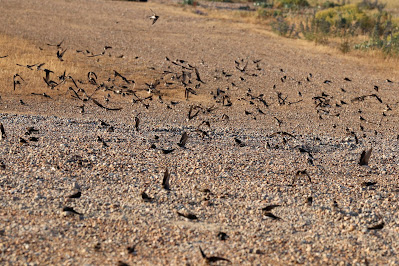 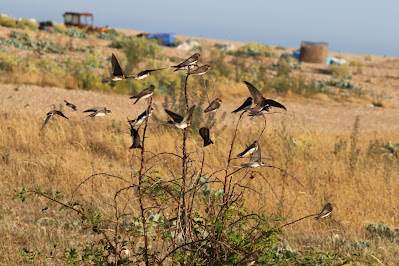 Five Porpoises were feeding offshore and a Common Pipistrelle was feeding over the moth traps in the early hours.

Our third record of the micro Bisigna procerella was probably the best from the moth traps but a remarkable aberrant Single-dotted Wave ran it a close second. 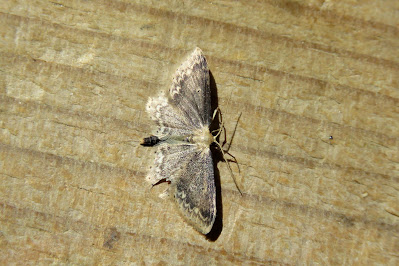 A nymph Southern Oak Bush-cricket was also caught in the moth trap.