The wind had dropped by the morning and resulted in a slow movement of seabirds to start with but things definitely started to pick up in the afternoon and evening. The highlights were a total of seven Pomarine Skuas (including a party of four which floated by on the sea), 22 Great Skuas and 12 Arctic Skuas along with 11 Shoveler, a Pintail, 15 Whimbrel, eight Mediterranean Gulls and a trickle of Sandwich and "commic" Terns. The gulls roosting on the beach at the Patch included a first-summer Caspian Gull and a second-summer Yellow-legged Gull.
It remains very quiet on the land with just a Buzzard, a male Pheasant, a flyover Little Ringed Plover, a Merlin and a Yellow Wagtail of interest. An interloping immature female Peregrine Falcon came into the area but was quickly seen off by the local birds and the local-breeding Ravens have just successfully fledged four young.

There were at least 25 Porpoises and three Grey Seals feeding offshore.

Plenty of Small Coppers were seen and two Grizzled Skippers were found at the southern end of the trapping area. A search for shieldbugs produced six individuals of the Geotomus species in my usual small patch of ground in the moat and also a single Brassica Bug. 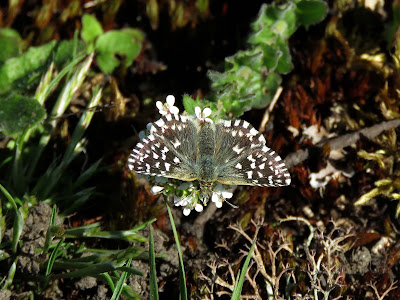