So much for the heatwave? Another day of howling, cold north-easterly winds continued to make observations difficult. Two Yellow Wagtails were the only birds of note.

The first Essex Skipper and Common and Ruddy Darters were seen today.

Very little to be seen in cold and very windy conditions. Two Mediterranean Gulls were about the best on offer.

The Serin was still present at Littlestone.
at 22:16

Nothing to report on the bird front.

The mothtraps were very productive again with at least 135 species recorded including Pale Oak Beauty and Small Fanfoot - both fourth Observatory records. 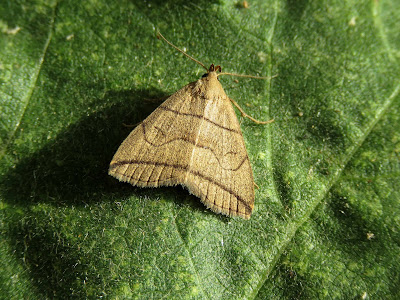 Elsewhere, the Serin was still singing at Littlestone.
at 00:01

Nothing to report on the bird front but more thunderstorms in the early hours brought a small arrival of migrant moths. Unfortunately the storms also resulted in power cuts which obviously affected the catch but there was one notable highlight in the form of the 4th British record of the superb pyrale Chrysocrambus linetella.
Other bits in the traps included four Dioryctria abietella and our 3rd record of Red-necked Footman.
Elsewhere, a Ringed Border was caught at Littlestone - the third area record of this very recent colonist.

The highlight of the day on the bird front was a brief visit to the Point of two Bee-eaters which came in over the New Lighthouse, flew round the Old Lighthouse and then quickly headed north and out of sight this afternoon. Four Yellow Wagtails also passed through during the day. A visit to the Patch produced our first juvenile Mediterranean Gull and Black-headed Gull of the summer.

Despite continuing low numbers of the moths in the traps last nights effort produced some surprising records with only the third Dungeness example of the Common Rock-rose feeding pyralid Hypochalcia ahenella. The last Dungeness record was in 1986. In addition, another pyralid, Dioryctria abietella was also likely to be a migrant. We also had our earliest-ever Langmaid's Yellow Underwing.
Large numbers of Painted Lady butterflies are now starting to arrive. 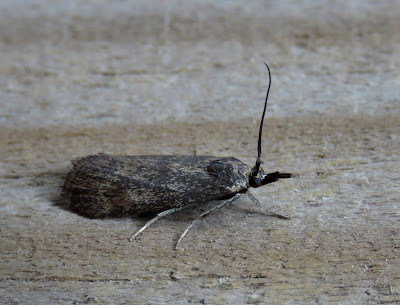 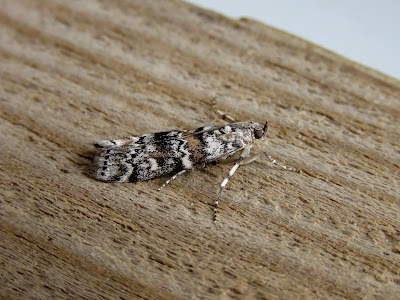 Very little to report. A Marsh Harrier was hunting over the Desert.

Three Porpoises and a Grey Seal were feeding offshore and two Brown Hares were seen in the Desert.

Butterflies seen today included 40 Painted Ladys but the moth traps were very quiet with just 51 moths caught in two traps and nothing of note.
at 00:07

Very quiet with just a Corn Bunting over the Observatory of note on the land.

Last night at around midnight there was another impressive but brief display of Noctilucent Clouds. 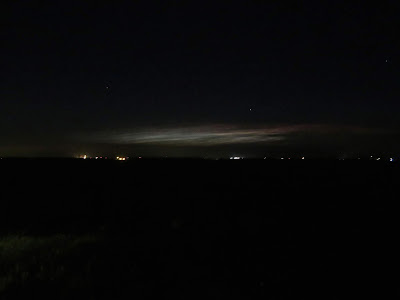 A Mediterranean Gull which flew west was the only bird of note.

Two Porpoises and a Grey Seal were feeding offshore.
at 14:16

A Brown Hare was seen in the Desert.

Strong winds continue to hinder butterfly and dragonfly observations but numbers of Painted Lady seemed to increase during the day.

The Serin was singing again at Littlestone.
at 23:44

A Stoat was seen.

The moth traps were not run  and the weather limited butterfly and dragonfly sightings.
at 23:39

A Curlew, 31 Swifts and a Grey Wagtail flew over the Observatory this morning and five Mediterranean Gulls were feeding offshore.

Three Porpoises were feeding offshore and a Brown Hare was seen in the Desert.

A Red-eared Terrapin was seen in the Southern Long Pit.

The moth traps were a bit better than of late with a Rest Harrow and a Rosy Wave of note. In addition, another 61 Rest Harrow moths were seen at the three locations around the Long Pits.

A Marbled White in the Moat was the first of the year.

A Buzzard, 40 Swifts and a Grey Wagtail flew over.  Five Mediterranean Gulls were seen offshore.

A Porpoise and a Grey Seal were feeding offshore.

A new colony of Rest Harrow moths was found inside the Power Station perimeter but the moth traps themselves were disappointing.
at 15:21

Two Yellow-legged Gulls were seen at the Patch this morning and a Mediterranean Gull flew west this evening. Quiet on the land except for 60 Swifts flying over the Observatory this morning.

A White Colon was the highlight of another small overnight catch of moths and a Variable Damselfly was seen at the Long Pits.

A Mediterranean Gull was seen offshore and 72 Swifts and a Yellow Wagtail flew over the Observatory.

The Serin was still singing from its chosen trees at Littlestone.

Two Manx Shearwaters this morning were about the only birds of note.

A single Porpoise was feeding offshore.

The first Hornet Hoverfly Volucella zonaria of the year was seen in the trapping area. 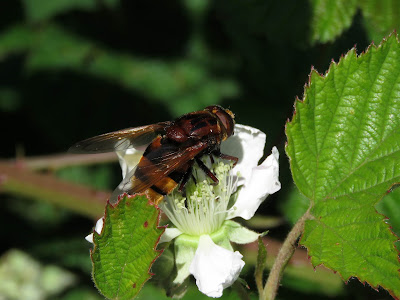 Very little in the way of new migrants but a Cuckoo was a nice capture in the Heligoland Trap in the moat and an Arctic Skua flew east offshore. 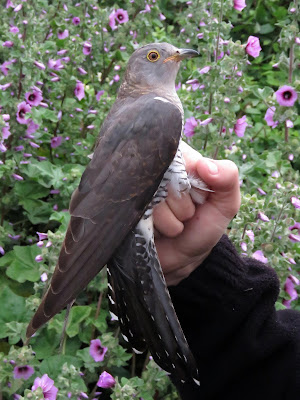 Checking of the moth traps last night showed that there were very few moths on the wing but whilst outside I witnessed as a brief but spectacular display of a rare Noctilucent Clouds. 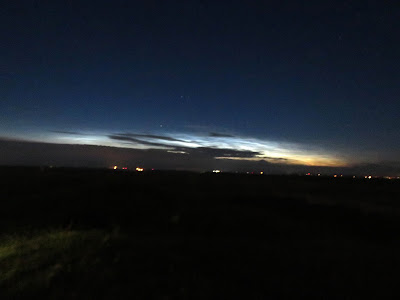 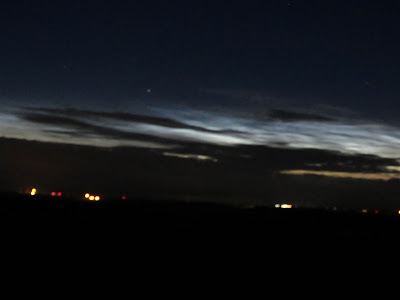 The highlight of the day was a Honey Buzzard which came in and passed over the trapping area before heading off west and over to the RSPB Reserve at around 0935hrs. Other migrants were virtually non-existent.

Late news from yesterday concerns two Great White Egrets which flew out to sea during the morning.

The Serin was still singing in its usual place at Littlestone.
at 23:29

A much nicer day but still not a great deal to be seen. A Corn Bunting was seen on the power station wall and two Tufted Duck flew west offshore.

The first Small Skippers of the year were seen and two Variable Damselflies were found at the Long Pits.

The Serin was still showing well at Littlestone.
at 00:20

A thoroughly miserable day of almost constant rain which severely limited any coverage but allowed plenty of administration to be done.

The Serin was still showing itself at Littlestone.
at 00:05

Another fairly uninteresting day on the bird front with three Mediterranean Gulls offshore and a lone Willow Warbler at the Long Pits. There were lots of young Stonechats and at least two family parties of Black Redstarts in the area.

The first Rest Harrow moths are starting to appear.

One Porpoise was feeding offshore.
at 22:57

An increasingly wet and windy day which produced just three Mediterranean Gulls and an Arctic Skua offshore. Very quiet on the land with just 110 Swifts overhead of interest,

Two Porpoise and a Grey Seal were feeding offshore.
at 23:00

Three Barnacle Goose flying over the area this morning was the dubious avian highlight of the day.

At least two Brown Hares were seen near the Sanctuary and a Grey Seal was feeding offshore.

The first Large Skippers and Meadow Brown of the year were seen and seven Variable Damselflies were seen at the northern end of the Long Pits.

A Turtle Dove was singing at the Long Pits and just about manages to scrape itself onto the Observatory area year list. A second-summer Yellow-legged Gull was on the beach at the Patch.

An excellent total of nine Variable Damselfly were seen at the top end of the Long Pits.

Elsewhere, the Serin remains at Lttlestone.
at 23:00

Bright and sunny at first but quickly turning to rain and then continuing for much of the day and with fog at times.Nothing much to report on the bird front other than a Mediterranean Gull moving east this morning.

A Roseate Tern was seen on Burrowes this afternoon and evening. The Serin continues to sing at Littlestone.
at 22:49

Very little to report today. A Spotted Flycatcher in the trapping area and four Mediterranean Gulls at the Patch were about the best on offer.

Three Hummingbird Hawk-moths (including a mating pair) were seen on the Power Station wall. A worn Grizzled Skipper was the first for a few days.
at 00:11

A fresh southerly breeze today resulted in an increase in the numbers of birds offshore with 11 Eiders, 368 Common Scoters, 30 Mediterranean Gulls and three Arctic Skuas passing through of note.
Very quiet on the land.

Four Porpoises and a Grey Seal were feeding offshore.

The overnight moth traps produced a couple of minor surprises in the form of our fourth Grass Rivulet and seventh Small Yellow Wave.
Elsewhere, the male Serin continues its vigil at Littestone.
at 00:58

A Garganey and a Great Skua flew east and three Mediterranean Gulls flew west this morning while an evening watch produced a party of three Pomarine Skuas.
Very quiet on the land with just a Corn Bunting of note.

Mammals seen today included a minimum of 21 Porpoises and two Grey Seals offshore and a Weasel and a Brown Hare on the land.

Two Red-eared Terrapins were sunning themselves in the warm weather at the Long Pits.
at 23:02
Spring is here. Why not come and stay at the Obs and get up close and personal with the birds as they travel back to Britain. 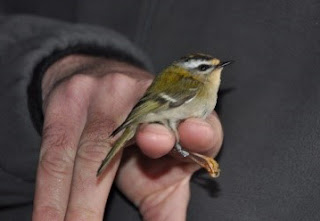