After being absent for a couple of days the Iceland Gull was back at the Patch again along with a first-winter Caspian Gull. The morning seawatch produced 38 Pintails, three Shovelers and two Teal of note. The Grey Wagtail was singing in the power station again.

A pretty quiet day despite the spring-like conditions. A handful of duck passed by offshore with two Pintail, three Shovelers and two Eiders of note and a Merlin came in. The first migrant Black Redstart of the spring was seen in the Moat.

A bright and sunny day after a cold and frosty start. There were a couple of sightings of Red Kite this morning and two Marsh Harriers were hunting over the Trapping Area. There was a hint of passerine movement this morning with 20 Redwings, four Song Thrushes, four Grey Wagtails and four Greenfinches of note.

A Common Seal was feeding offshore and a Pygmy Shrew and two Bank Voles were seen on the land.

There were several sightings of Red Kite across the wider Dungeness area today and eventually one was seen in our recording area just before dark. It was otherwise a very quiet day. Two Red-breasted Mergansers flew west this morning. Two Firecrests were seen at the Long Pits, two Siskins flew over and 60 Pied Wagtails came into roost at the Power Station.

There was a bit movement offshore with 170 Brent Geese and four Mediterranean Gulls moving up-channel and a Shag moving down-channel. The regular Iceland Gull briefly came onto the beach at the Point and allowed for a few more photographs to be added to the collection. 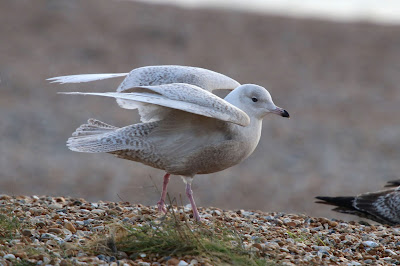 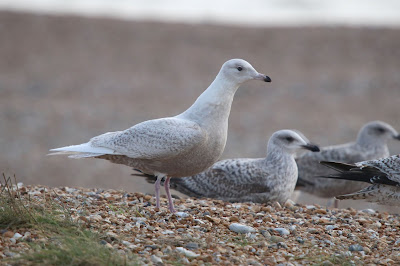 The Iceland Gull was still present and two Chiffchaffs and two Firecrests were seen on the land.

Perhaps surprisingly, it was very quiet offshore despite the light southerly winds but the Iceland Gull was at the Patch again.

Two Satellites were the only moths trapped.

The Iceland Gull was at the Patch along with two Caspian Gulls and two Yellow-legged Gulls. There was a hint of migration on the land with a singing Chiffchaff on the Point rather than the Trapping Area and two Fieldfares and 12 Redwings also seen. The regular Grey Wagtail was still in the power station and three Ravens flew over.

Of note from elsewhere was a very early Wheatear at Galloways Road.

The regular Iceland Gull, three Caspian Gulls and a Mediterranean Gull were feeding at the Patch and 172 Brent Geese, four Shelduck,  and 13 Pintails moving up-channel were also of note. The Grey Wagtail was feeding inside the power station complex.

Two Snipe and three Stonechats were of note on the land.

The Patch remains the main site of interest with the Iceland Gull still present along with an adult Mediterranean Gull, two first-winter Caspian Gulls and a second-winter Yellow-legged Gull. A Chiffchaff was seen in the trapping area.

Only the Patch was checked today where the Iceland Gull was still present along with a first-winter Caspian Gull and two Yellow-legged Gulls. A party of five Pintails and a Red-breasted Merganser also flew east.

The Iceland Gull was still feeding at the Patch along with an adult Mediterranean Gull and a second-winter Yellow-legged Gull. The Grey Wagtail was feeding around the Sewage Unit in the power station again. The trapping area was very quiet except for a Chiffchaff and some singing Redwings.

The morning was spent at the Patch after which heavy rain arrived and meant time spent on paperwork. Of note were the regular Iceland Gull and two first-winter Caspian Gulls. A Great Skua was also marauding around the Patch and causing havoc amongst the gulls.

There were fewer gulls at the Patch this morning but the Iceland Gull was still present and a second-winter Mediterranean Gull and two third-winter Caspian Gulls were seen. In the afternoon a second-winter Yellow-legged Gull came to bread at the fishing boats.

A Grey Seal was seen at the fishing boats.

Although the wind eventually veered into the south it was still tough going in the cold and windy conditions. A one hour seawatch this morning saw 45 Brent Geese and a few Red-throated Divers, Gannets and auks move east. There were thousands of birds at the Patch again with the regular Iceland Gull along with five Mediterranean Gulls, six (five first-winters and a third-winter) Caspian Gulls and a second-winter Yellow-legged Gull.

A check of the trapping area and desert this morning produced two Woodcocks, three Snipe, a Chiffchaff, a Firecrest, two Fieldfares, two Song Thrushes and 25 Redwings and a Black Redstart was feeding at the entrance to the power station. A short seawatch this afternoon produced a first-winter Little Gull of note.

Large numbers of gulls were feeding at the Patch again with the Iceland Gull still present along with a first-winter Caspian Gull and four Mediterranean Gulls. A check of the Long Pits produced four Snipe.

An early morning check of the trapping area produced a Woodcock, seven Snipe, a Firecrest and 20 Redwings and also two Little Grebes on the Northern Long Pit.

The sea was fairly quiet although the Iceland Gull was seen in the afternoon.

Not a great deal to report today. The best of nearly four hours of seawatching were four Velvet Scoters, 386 Red-throated Divers, two Mediterranean Gulls and a Sandwich Tern.

A Porpoise was also feeding offshore.

Snow on and off through the day with blizzard conditions at times especially during the morning. The cold was also beginning to affect the birds with birds passing west offshore including 425 Brent Geese, 350 Wigeon, four Pintail, six Teal, four Grey Plovers, two Bar-tailed Godwits, ten Mediterranean Gulls and a surprise Sandwich Tern. Lots of gulls were feeding the Patch including three first-winter Caspian Gulls. Birds have also started to arrive on the land with another 23 Teal on the Long Pits, two Woodcocks, 26 Snipe, eight Skylarks and eight Redwings.

Limited coverage again on a freezing day with frequent snow flurries and strengthening northerly winds. There was a small indication of a cold weather arrival with 35 Lapwings, a Woodcock, two Redwings and a Fieldfare being seen. A check of the Patch produced the regular Iceland Gull and two Caspian Gulls.

The first moth of the year was caught in the trap in the form of a Satellite.

A couple of seawatching sessions produced 94 Brent Geese up-channel, 612 Red-throated Divers, ten Mediterranean Gulls and 1777 auks while the Iceland Gull and two Caspian Gulls were still at the Patch. A Mistle Thrush at West Beach was the first of the year and the smart male Black Redstart and the Grey Wagtail were feeding around the Sewage Treatment Unit again. A Chiffchaff was singing in the Trapping Area. 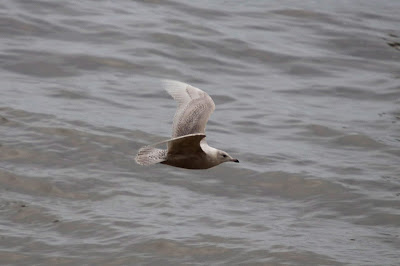 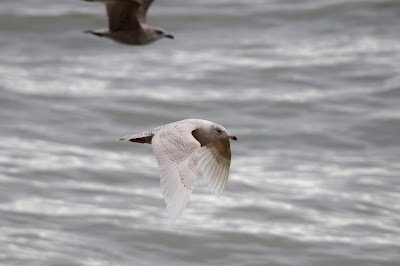 The first butterfly of the year, a Peacock, was seen in the Trapping Area.
at 00:18

The morning seawatch produced 12 Brent Geese, 209 Red-throated Divers and 380 auks sp in an hour. The Patch wasn't working today but large numbers of Cormorants were roosting on the beach. The Grey Wagtail and male Black Redstart were back at the sewage treatment unit and a Firecrest was singing in the Trapping Area. 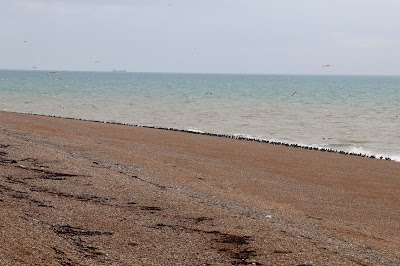 A Common Seal was also seen on the beach.

Elsewhere, the Glossy Ibis was showing well in the small pools at Boulderwall.

With miserable weather through the morning it was mainly a day of paperwork but a visit to the shore in the afternoon saw 13 Brent Geese head east and seven Shelduck, 90 Red-throated Divers and 350 auks west. The regular Iceland Gull also made a brief appearance at the fishing boats.

A check of the Long Pits produced a Barn Owl, a Woodcock and two Snipe and the Iceland Gull and two Caspian Gulls were on the beach at the Patch again.

A disused Harvest Mouse nest was found in one of the bird nest boxes.

The second-year Iceland Gull and three Caspian Gulls were at the Patch again this morning and five Shelduck, 22 Wigeon, six Pintail, 132 Red-throated Divers, five Mediterranean Gulls and over 3,500 auks flew east. A Raven also flew over the Power Station and six Ringed Plovers were on the beach.