Please be aware that there are extensive ongoing excavation works around the Observatory until after Christmas. Please be very careful driving over the moat and note that parking may be difficult. We are, however, open for business and welcome anyone interested in winter birding around Dungeness.

A Dartford Warbler in the Station Gorse was the highlight of the birds on the land. The sea was very quiet except for huge numbers of Cormorants with at least 2534 birds seen.

It is still fairly quiet around the general area but four Cattle Egrets are being seen regularly around Boulderwall and the occasional Caspian and Yellow-legged Gulls can usually be seen on Burrowes.
at 22:23

A bright and dry day for a change. The morning seawatching produced an Eider, 66 Red-throated Divers, a Shag, 744 Gannets, 88 Kittiwakes, 11 Mediterranean Gulls, a Great Skua and 246 auks. A Rock Pipit was also seen on the beach while a Redpoll flew over the trapping area.
at 00:12

Yet another very miserable day with strong winds and almost continuous rain. The sea was very quiet other than a steady trickle of Gannets and Kittiwakes. An adult Caspian Gull was briefly among the birds roosting on the beach where a Merlin was also hunting.
Also very quiet on the land except for a Brambling at the feeding station in the trapping area.
at 23:29

Another miserable day with just a steady trickle of Gannets, Kittiwakes and auks moving west. Two Caspian Gulls (the regular colour ringed first-winter X86C and a new third-winter) on the beach but neither coming to bread.
at 22:26

Another miserable day but fresh southerly winds produced a decent movement of birds with a Red-breasted Merganser, a Black-throated Diver, over 1000 Gannets, 258 Kittiwakes, a Mediterranean Gull, three Sandwich Terns, three Great Skuas and two Pomarine Skua of note. An adult Yellow-legged Gull was among the gulls on the beach.

A Hummingbird Hawkmoth was a surprise find in the moth trap this morning.

Fresh southerly winds again produced a bit of movement offshore with six Shelducks, 18 Wigeon, five Red-breasted Mergansers, 500 Gannets, five Dunlin, 230 Kittiwakes and 320 auks. A Merlin was also hunting offshore.
It was quiet on the land with just five Snipe and three Chiffchaffs in the area.

I also played the Audiomoth last night with six hours of recording producing a Lapwing, two groups of Golden Plover, 14 Dunlin, a Snipe, 17 Blackbirds, 80 Redwings and seven Song Thrushes. There were also 12 series of calls which sounded like Stone-curlew again.

Fresh southerly winds again resulted in a bit of an increase in offshore passage with four Eiders, five Fulmars, 470 Gannets, three Mediterranean Gulls,  ten Sandwich Terns and around 500 auks. A Merlin was also seen.
at 23:26

A cold, very dull day with very little change. Seawatching produced just two Mediterranean Gulls, four Sandwich Terns and a Great Skua. A Woodcock, a Chiffchaff, a Firecrest and six Redwings were the best on offer on the land.
at 23:26

It remains very quiet with just two Snipe and a Chiffchaff in the trapping area and three Eiders and two Sandwich Terns offshore of interest.
at 23:05

A cold, frosty morning with very little to be seen.
at 23:59

Very quiet although coverage was a bit limited today.
at 18:35

The highlight of what was otherwise another quiet day was a Pallas's Warbler in the moat seen for a few minutes by a handful of observers in mid-morning. A couple of Firecrests were also feeding in the moat.
The only birds of note offshore were a Shag and two late Sandwich Terns and an adult Yellow-legged Gull was feeding at the fishing boats.

I ran the AudioMoth sound recorder again last night and recorded a few Redwings, Blackbirds, Song Thrushes, Dunlin, Snipe and remarkably a Stone-curlew. Presumably this is likely to be the bird found this morning on the shingle beach at Greatstone. What's even more surprising is that this is the second time that this pattern of events has occurred this autumn with the bird seen at the back of ARC on 29th October being preceded by calls recorded during the night before.
at 23:16

A generally quiet day but also a few notable birds including a Woodcock, a first-winter Caspian Gull at the Patch and a Dartford Warbler.
at 23:48

Another cold, mainly wet day. There was a trickle of birds moving offshore with eight Teal, 23 Wigeon, three Pintails, four Eiders and five Sandwich Terns. The Patch finally seems to be in operation again and attracting good numbers of gulls with a Mediterranean Gull, four Caspian Gulls (two first-winter and two second-winter) and a first-winter Yellow-legged Gull. More unusual was a party of three Goosanders feeding in the disturbed water.
A few finches passed through with 50 Chaffinches and 40 Goldfinches and a Merlin and two Firecrests were of note on the land.

A Grey Seal and a Common Seal were feeding offshore.

We have also had the results back from Martin Collinson/Thomas Shannon at Aberdeen University on the DNA analysis of a couple of birds ringed here at the end of October. These confirmed that a Chiffchaff caught on 28th October was indeed a Siberian ssp tristis. and an "eastern" Lesser Whitethroat caught on 30th October was (as suggested at the time) of the ssp halimondendri and now called Central Asian Lesser Whitethroat.
at 00:27

Another quiet morning - autumn really does seem to be coming to an end. Three hours of seawatching produced four Red-breasted Mergansers, two Mediterranean Gulls, 145 Kittiwakes, eight Sandwich Terns and singles of Great and Arctic Skua. On the land a couple each of Chiffchaff and Firecrest were the only notable birds.

An example of what I believe to be Rhodotus palmatus was found on a dead branch of Elm at the southern end of the trapping area. This appears to be a fairly scarce fungus at a national level and a new species for the Observatory area. 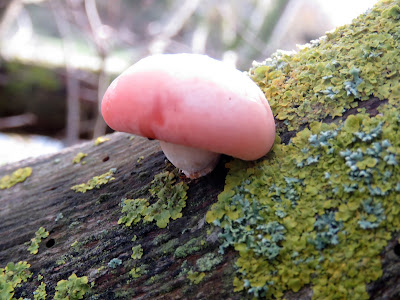 A bright and calm but generally quiet morning. The best of a few birds on the land were a Green Sandpiper on the pools in the flooded trapping area, eight Chiffchaffs, a Firecrest, a Brambling and two Bullfinches.

There were a few Common Darters still on the wing.
at 23:39

A very quiet day with just a late Swallow at the fishing boats and a Firecrest, three Chiffchaffs and a Bullfinch on the land of note.
at 17:27

Most of the interest was offshore again with a juvenile Pomarine Skua and a Little Auk this morning along with 257 Kittiwakes, three Mediterranean Gulls, ten Sandwich Terns and a Great Skua during the day. Three Merlins, four Chiffchaffs, a Grey Wagtail and a Rock Pipit were about the best on offer on the land.

A Common Seal and a Grey Seal were feeding offshore.
at 23:28

Seawatching in the fresh easterly breeze produced a surprising total of 86 Sandwich Terns heading into the wind this morning along with a Black-throated Diver, 109 Kiittiwakes and three Great Skuas while a Great Northern Diver flew west in the afternoon.
A briefly seen Long-eared Owl was the best of a handful of birds seen on the land which also included a Marsh Harrier and five Firecrests.
at 00:03

Seawatching produced a few interesting bits and pieces with a Long-tailed Duck, a Black-throated Diver, 18 Sandwich Terns and a Great Skua of note.
Very quiet on the land with just 19 Stock Doves, a Firecrest, a few Blackbirds, a Fieldfare and a Brambling of interest.

A Weasel was seen.

Limited coverage today with just a Blackcap and two Firecrests of note.
at 00:28

The morning seawatch produced five Teal, two Mediterranean Gulls, two Sandwich Terns and two Great Skuas and later in the day, a drake Goosander of note while five Swallows, a Firecrest, 20 Redwing and a Rock Pipit were the best on offer on the land.

Two Porpoises and singles of Grey and Common Seal were feeding offshore.
at 00:24

There was a trickle of birds overhead and offshore but very little in the way of grounded migrants. Highlights on the land included a Great White Egret (feeding in the flood waters in the Desert), three Marsh Harriers, a Buzzard, a Woodcock, four Merlins, five Bramblings, five Rock Pipits and six Redpolls of note. The Shore Lark was still at the fishing boats.
Four hours of seawatching produced a female Goosander, 327 Kittiwakes, three Little Gulls, two Mediterranean Gulls, 12 Sandwich Terns, a Great and an Arctic Skua and best of all, a lone Little Auk in the afternoon.
at 00:14

After heavy overnight rain the day itself was very pleasant but generally quiet for birds. The Shore Lark continues to show very well around the puddles at the fishing boats and five Firecrests and two Blackcaps were seen in the bushes. Seven Swallows, three Bramblings and a handful of Siskins and Redpolls flew over.
Very quiet offshore other than a steady passage of Razorbills. 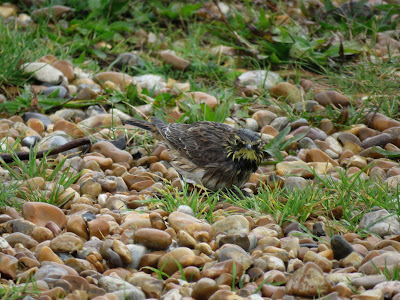 The feeding station in the trapping area was stocked with food for the first time this autumn having been abandoned since April. It was interesting to see just how quickly the Great and Blue Tits and Chaffinches discovered the food with five minutes between walking away from the feeders and the first visits by birds.

A calm and dry first few hours but then extremely wet for most of the rest of the day. There were a few migrants in the bushes with 70 Goldcrests, 11 Firecrests, ten Chiffchaffs, two Blackcaps, two Bullfinches and the highlight of a Yellow-browed Warbler at the Long Pits. The Shore Lark was still feeding around the puddles at the fishing boats. There was also some visible migration including 28 Skylarks, four Swallows, three Bramblings, 28 Redpolls and 11 Siskins.

A White-speck moth was trapped overnight.
A Brown Hare was seen in the Desert.
at 23:10

Two Porpoises and a Grey Seal were feeding offshore and a Stoat was seen on the land.
at 23:37

A dismal day once the weather closed in with storm force winds and prolonged rain. Very little of interest with the Shore Lark and the long-staying colour-ringed Caspian Gull still on the beach for much of the day and a couple of Firecrests in the moat.
at 23:53

A day with almost constant rain and fresh to strong southerly winds. There were large numbers of 'crests including 10 Firecrests and a handful of Chiffchaffs, Blackbirds and Black Redstarts. The Shore Lark was still feeding around the puddles at the fishing boats. A few birds were also moving offshore with three Pintails, four Red-breasted Mergansers, three Mediterranean and four Little Gulls, 36 Sandwich Terns and singles of Great and Arctic Skuas of note.

One Porpoise was feeding offshore.
at 00:18

A day of oddities rather than large numbers (except for 1000 Goldfinches) and the Shore Lark still present on the beach at the fishing boats. The oddities included a Woodcock, a Little Owl in the trapping area, a Dartford Warbler in the Desert, 15 Firecrests and flyover Bearded Tit, Twite (two), and Lapland Bunting. 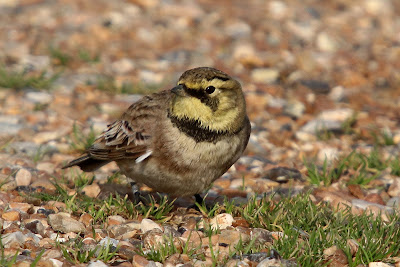 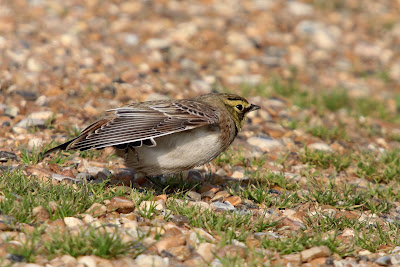 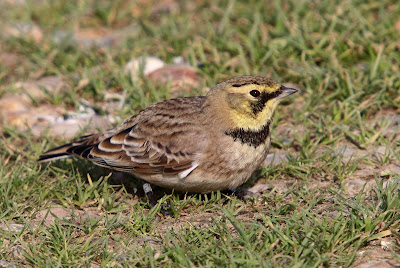 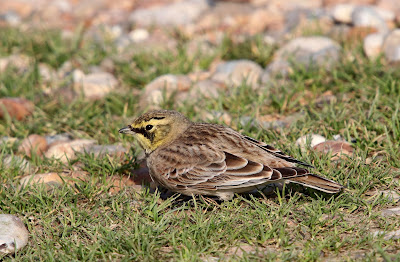 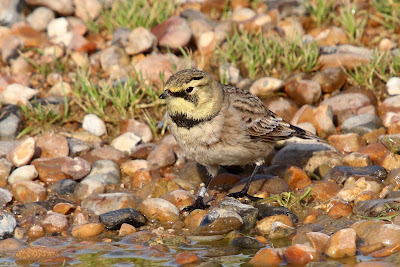 A late Hummingbird Hawkmoth was seen at the Lighthouse Garden.

Finally, today saw the end of two seasons work by Jacques Turner-Moss as Assistant Warden. A big thank-you to Jacques for all the hard work he has put in collecting data and ringing birds for the Observatory, helping to welcome guests and day visitors, sharing the Observatory work with them and representing the Observatory in many other ways.
at 00:33
Newer Posts Older Posts Home
Subscribe to: Posts (Atom)