A bit of a turnaround in the weather with an increasingly strong and cold NE wind developing. There was very little on the land except for seven Wheatears and a Firecrest although there was a bit of passage overhead including two Swallows, two Rock Pipits, 70 Linnets and 35 Goldfinches. The sea was also fairly slow with just four Shelduck, two Little Gulls, a Mediterranean Gull and 61 Sandwich Terns along with the first two Common Terns of the year. The Iceland Gull was feeding at the Patch again this evening.

There was a distinct improvement in the moth trap overnight with the best being only our sixth record of Red Chestnut. 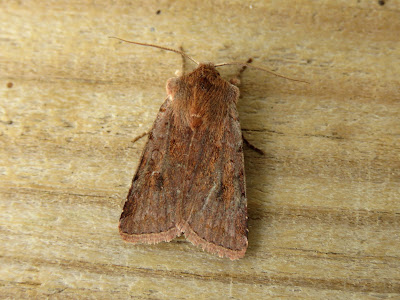