A calm, sunny day but still with cold air. Very few passage migrants on the land although the breeding populations of Whitethroats, Lesser Whitethroats, Blackcaps and Reed Warblers are beginning to build up. Passage migrants of note included five Mediterranean Gulls, a Hobby, 30 Swallows, three Sand Martins, a Garden Warbler, six Yellow Wagtails and singles of Redpoll and Siskin. There was also signs that Mute Swans were unusually active today with a flock of 12 flying over the Long Pits and another ten birds seen offshore and even landing on the sea.

Seawatching was fairly slow going in the morning but persistence by some paid off as movement increased considerably in the afternoon. An 11 hour session eventually produced 176 Brent Geese, 21 Velvet Scoters (one flock of 18), 458 Common Scoters, three Black-throated Divers and a Great Northern Diver, 23 Sanderling, 38 Dunlin, 36 Whimbrel, five Little Gulls, three Mediterranean Gulls, 14 Little Terns, 495 Common and 360 Arctic Terns plus 4330 "Commic Tern", a Black Tern, ten Great Skuas, a Pomarine Skua and nine Arctic Skuas. The Iceland Gull was still feeding at the Patch and another 42 Swallows and a Sand Martin also came in.

A White-beaked Dolphin moving east fairly close inshore was the highlight of the mammals along with 20 Porpoises and a Grey Seal and three Brown Hares were seen on the land.

The only Early Spider Orchid on the Point is now in flower. 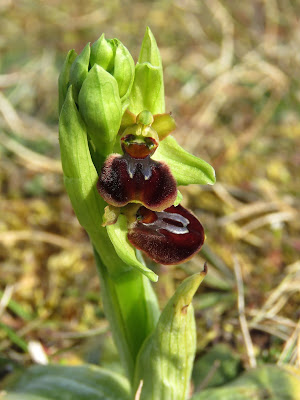 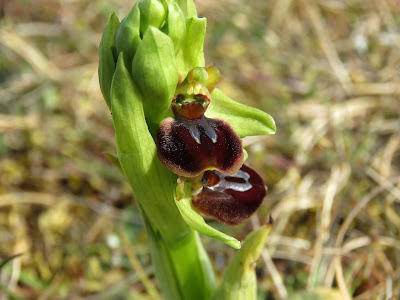