Chiffchaffs and Blackcaps arrived in reasonable numbers again this morning while other grounded migrants included eight Wheatears and three Whinchats. Birds passed overhead in small numbers with a Tree Pipit of note along with higher numbers of Swallows and House Martins. It was also more of the same at sea with at least 28 Arctic Skuas patrolling offshore along with two Great Skuas. A few ducks also passed through with 24 Pintail and 11 Teal.

Five Porpoise and a Grey Seal were feeding offshore.

Moth trapping produced another two Hoary Footman and a Delicate while further scrutiny of the butterflies produced another Small Copper ab,radiata and a stunning Common Blue aberration which may be ab.apicata-caeruleacuneata. 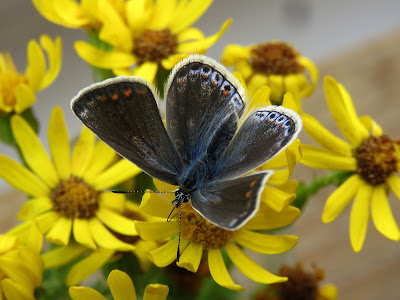