A little bit more around on the land this morning with a Hobby, ten Chiffchaffs, the first Firecrest of the autumn in the Moat and four Tree Sparrows in the Observatory garden and 20 Yellow Wagtails, two Grey Wagtails and a Tree Pipit overhead. In the late afternoon a Honey Buzzard flew over the Point.

There were hundreds of Sandwich Terns and 120 Kittiwakes feeding offshore and these in turn were attracting some excellent numbers of Arctic Skuas with at least 30 lingering and chasing them. Genuine passage remains slow but did include two Balearic Shearwaters and 18 Whimbrel.

More searching through the Small Coppers produced another aberrant individual - this one appearing to be a better example of ab.radiata. A Clouded Yellow was also seen in the Moat. 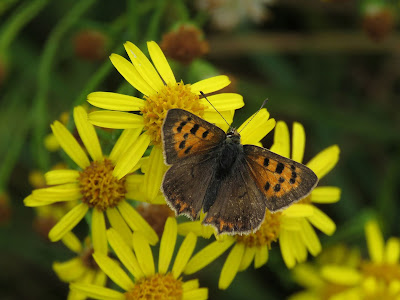 Moth numbers in the traps were not great but included our first Vestal of the year, another Delicate and a Pearly Underwing of note.