A murky morning saw the arrival of a few more Chiffchaffs and Blackcaps and a trickle of birds overhead including two Grey Wagtails, two Tree Pipits and five Reed Buntings. A Kingfisher was also seen at the Long Pits. It remains quiet offshore with just ten Sanderlings, three Mediterranean Gulls and two Arctic Skuas of note.

Three Porpoises, a Common Seal and a Grey Seal were feeding offshore.

The moth traps were quiet in terms of numbers but did include a Palpita vitrealis, a Delicate and a first for Dungeness in the form of this tiny Cosmopterix pulchrimella.

Also found in the moth trap was this example of the very local and very large diving-beetle Dytiscus dimidiatus. 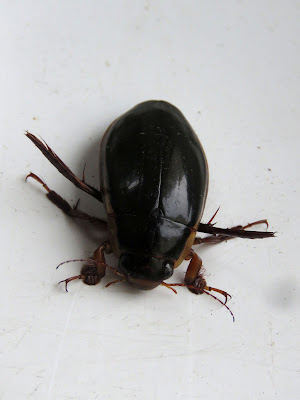