A misty start to the day then bright, warm and sunny. There was a decent arrival of Chiffchaffs and Blackcaps and some heavy movement of Swallows and House Martins along with 14 Yellow Wagtails, four Grey Wagtails and a Siskin overhead. Offshore, a Pintail and a Mediterranean Gull flew west and at least six Arctic Skuas were harassing terns offshore. The most unlikely bird of the day was a Black Swan which flew west offshore.
In addition, Lucy Mitchell joined us at the Observatory for the first of three morning to fit MOTUS radio tags to Blackcaps as part of a pilot project aimed at assessing the possibility of extending to the MOTUS netowokr to other ringing stations across the country. 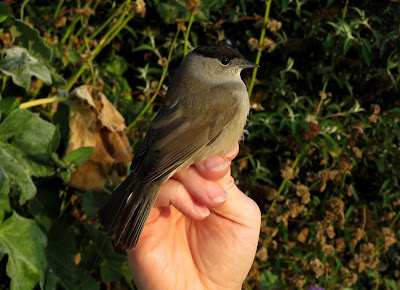