Seawatching was very slow this morning but as the wind increased in the afternoon there was an improvement with a long watch producing two Great Skuas, six Pomarine Skuas and 11 Arctic Skuas of note. On the land a male Cuckoo and a Hobby were of interest but very little else could be found.

A Badger was feeding in the Observatory garden in the early hours of the morning. Two Porpoises were seen offshore.

The rare shieldbug Geotomus petiti has now been found at three site in the Observatory area following confirmation of the identity of two more specimens as of this species. 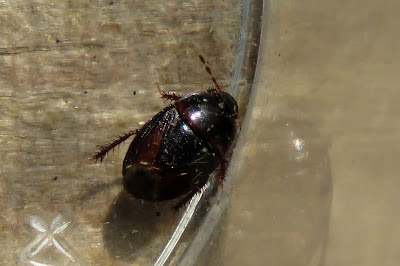 Elsewhere, a Cattle Egret was a new arrival on the RSPB Reserve.