There was a small but rich and varied arrival of migrants through the day with a Wood Warbler and a Grasshopper Warbler (both singing at the North end of the Long pits), six Whinchats, a Redstart,  three Spotted Flycatchers, a Pied Flycatcher (in the Old Lighthouse Garden) and a Tree Pipit. Commoner migrants included a Buzzard, 12 Willow Warblers, seven Garden Warblers, a few "Greenland" Wheatears, two Yellow Wagtails and two Redpolls.

The sea was very quiet with a two-hour watch this morning producing just a Mediterranean Gulls, two Little Terns and an Arctic Skua of note.

Seven Porpoises and a Grey Seal were feeding offshore and two Brown Hares were seen on the land.

Insects of note included another presumed Geotomus petiti shieldbug but from a new location so will need to be properly checked, another Hister quadrimaculatus in the moat. Two Grizzled Skippers were also seen. 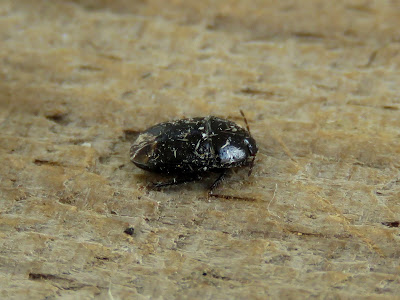