There were a handful of new birds on the land including a Mistle Thrush, four Rock Pipits, a Siskin, and best of all, a Wood Lark which was caught in the Heligoland trap this afternoon and only the sixth to be ringed. 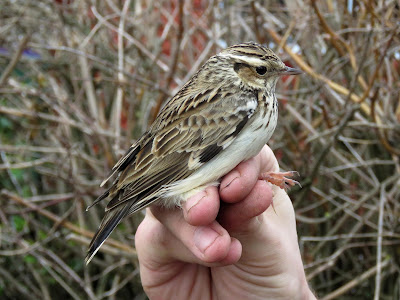 With slightly better visibility today there was also a bit of mainly easterly movement offshore with 570 Brent Geese, two Shoveler, 271 Red-throated Divers and a Great Northern Diver of note.

There was also noticeable increase in Porpoise numbers with at least ten feeding offshore along with a Grey Seal.