Another decent arrival of migrants on the land and plenty of ringing which produced the highlight of the day in the form of a Pallas's Warbler. Other grounded migrants included three Short-eared Owls, 20 Chiffchaffs, a Yellow-browed Warbler in the trapping area and a Dartford Warbler in the Desert, four Firecrests, 100 Goldcrests, two Ring Ouzels, 40 Blackbirds, 14 Fieldfares, 34 Redwings, 16 Song Thrushes and a Wheatear. 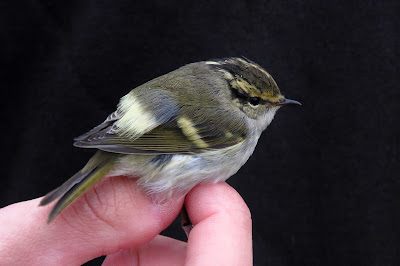 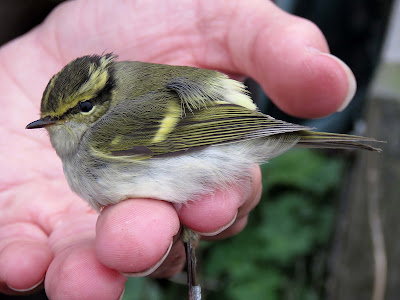 There was also a considerable movement of birds overhead with a flock of eight Great White Egrets appearing to go out to sea but then apparently returning in dribs and drabs during the rest of the morning. Also of note were six Rock Pipits, six Bramblings, an excellent total of 34 Crossbills, 40 Redpolls and 15 Siskins.

The sea remains fairly quiet with 501 Brent Geese, 36 Shelduck, 76 Wigeon, a flock of ten Velvet Scoters, a Mediterranean Gull and two Great Skuas of note in three hours of watching.