A day of mainly visible migration with notable birds including a flock of six Woodlarks, 38 Skylarks, 56 Swallows, seven House Martins, a Bearded Tit, three Tree Sparrows, 142 Meadow Pipits, four Rock Pipits, seven Bramblings, 119 Redpolls with four out of the five birds caught being Commons, 17 Crossbills, 750 Goldfinches and 31 Siskins. In addition the Robin shown below was trapped and found to be bearing a German ring. 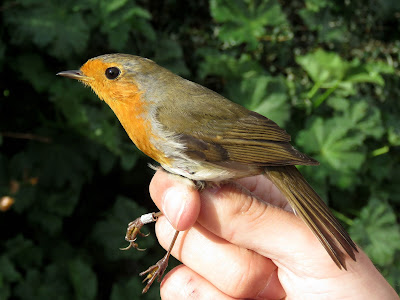