A Garden Warbler, a Sedge Warbler and five Reed Warblers were seen in the Trapping Area while 100 Sand Martins, ten Swallows, five Yellow Wagtails and a Grey Wagtail flew over. Three Mediterranean Gulls and two juvenile Yellow-legged Gulls were seen at the fishing boats. 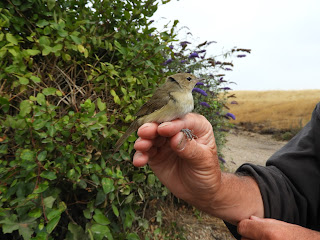 The moth traps were fairly quiet but they did produce a Channel Islands Pug and a Jersey Tiger. Three adult Mediterranean Stick-insects were found in the Observatory garden after dark and the Tree Cricket numbers are increasing with their "chorus" audible from the Observatory. in the calm conditions.