Seven hours of seawatching during the day produced three Balearic Shearwaters along with two Grey Herons, 11 Shelducks, 30 Mallard and 188 Sandwich Terns along with a steady flow of Sand Martins going out to sea. A juvenile Marsh Harrier and a Golden Plover flew over the trapping area and a Merlin, four Willow Warblers and three Yellow Wagtails were also seen.

Six Porpoise and two Grey Seals were feeding offshore and another Thresher Shark was seen breaching on a couple of occasions..

Highlights from the moth traps were a Pine Hawkmoth, a Sussex Emerald and another Loxostege sticticalis. 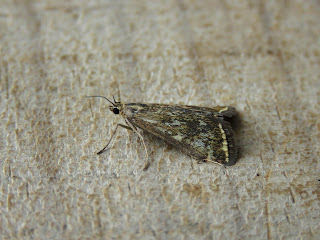