Most of the days avian interest was offshore although even here it was fairly slow going. Several watches during the day eventually produced a Balearic Shearwater, 149 Gannets, 51 Kittiwakes, eight Mediterranean Gulls, 109 Sandwich Terns, four Little Terns and an Arctic Skua of note. Four Willow Warblers were seen in the Trapping Area and 75 Sand Martins passed overhead.

Four Porpoises and a Grey Seal were feeding offshore.

As darkness fell another visit was made to the Trapping Area and this proved very successful with a total of seven Large Coneheads found (two seen well). A couple of Tree Crickets were heard singing and another three Sickle-bearing Bush-crickets were seen. 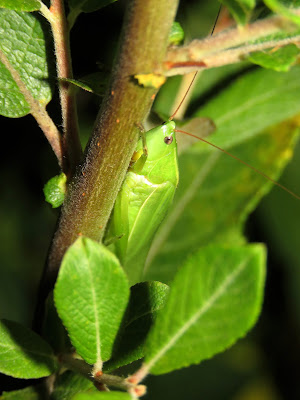