Just four Willow Warblers, a Ring Ouzel and four Corn Buntings were seen in the bushes and three Buzzards flew over. Fairly quiet offshore as well with over five hours of watching producing just one Velvet Scoter, three Mediterranean Gulls and a Great Skua of interest.

A Nathusius's Pipistrelle was flying around the Observatory this evening and a Brown Hare was seen in the morning. Offshore, at least six Porpoises and a Grey Seal were feeding.

The highlight from the moth trap was our fourth record of Scalloped Hazel and searching through the hoards of Small Coppers produced a smart aberrant form named radiata+caeruleapunctata. 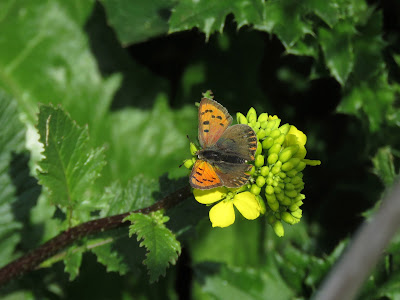