The highlight of the day was our second Black Kite of the spring but other than this most of the interest was offshore. Over 11 hours of seawatching produced 25 Teal, four Red-breasted Mergansers, two Manx Shearwaters, two Grey Herons, four Grey Plovers, 159 Whimbrel, 709 Bar-tailed Godwits, a Wood Sandpiper, 33 Little Gulls, six Mediterranean Gulls, three Great Skuas and ten Arctic Skuas. Other birds of interest included three Sand Martins, three Yellow Wagtails and two Siskins. 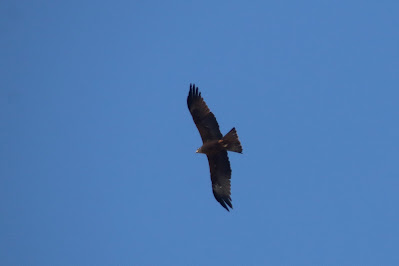 Butterflies of note included three Brimstones and a Grizzled Skipper.

At least 15 Porpoises and three Grey Seals were feeding offshore