The highlight of the day on the birdfront was an all too brief Bee-eater which lingered for a few minutes around Southview Cottage before departing in a northerly direction.

Several Porpoises were feeding offshore, a Brown Hare was seen in the Desert and a Badger came in to the back garden again to feed on the spilled grain from the birdfeeders just before midnight.

Two Grizzled Skippers and two Brown Argus were the highlights among the few butterflies seen. A check of the weed patches around the Observatory was very productive with another three Ornate Shieldbugs being found so it looks like we have a breeding population here now. Five Brassica Bugs were also found. 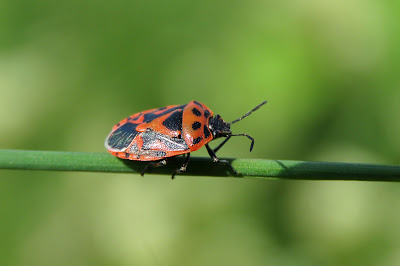