A new colour-ringed first-winter Caspian Gull was at the fishing boats for a short time around mid-day as was a first-winter Yellow-legged Gull. 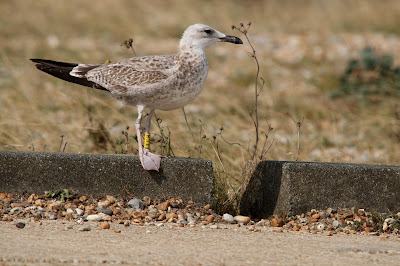 A Great White Egret at the Long Pits was an unusual record for the Observatory recording area and 155 Swallows, two Grey Wagtails, a Rock Pipit and 15 Siskin also flew over.

A Porpoise and a Grey Seal were feeding ofshore and a Brown Hare was seen in the Desert.