Yesterday afternoon a single call was heard on seven occasions at various locations between the Pumphouse and the middle of the trapping area which was thought to be that of a Hume's Warbler and eventually the briefest of views of a dull-looking "yellow-browed warbler" was had. Despite three of us then searching the trapping area until dark there were no further calls or sightings and it looked like it would be one that got away.
However, after opening the last of the regular nets this morning the same distinctive call was heard and a brief but reasonable view of the bird was had. A few minutes later the bird found its way into a net when it was now possible to confirm its identity as a Humes's Warbler. 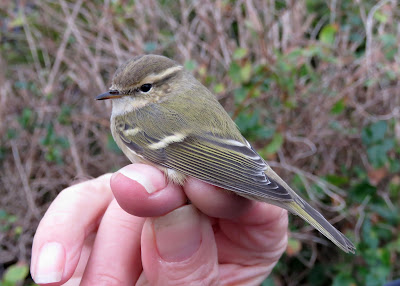 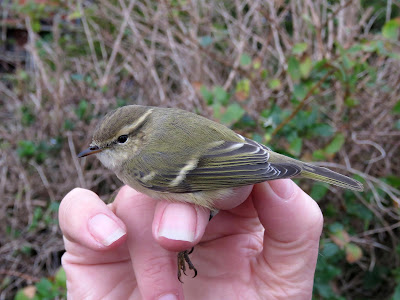 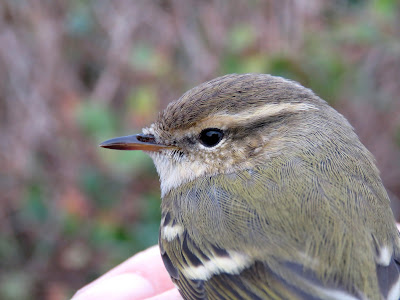 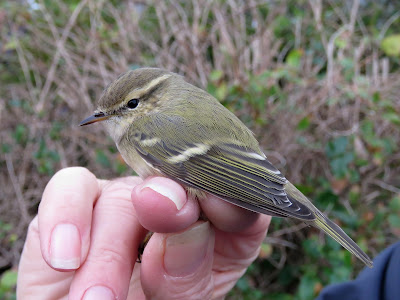 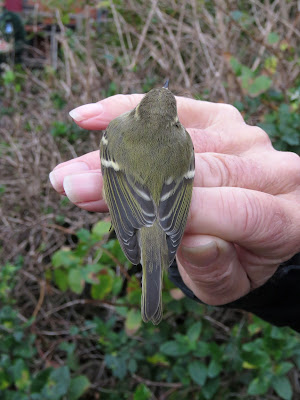 After ringing, taking notes and photographing the bird it was released back into the trapping area. It was heard calling at 1130 but was not seen again This is the third Observatory (and the first to be caught) and ninth Kent record.

Other migrants on the ground and overhead were very scarce with just two Firecrests, 25 Goldcrests, two Chiffchaffs, two Bramblings, a Bullfinch and 35 Redpolls of any interest.

The Grey Phalarope was feeding offshore between the Patch and the Point this afternoon but the sea was otherwise very quiet with just a Velvet Scoter, two Red-breasted Mergansers, a Sandwich Tern and nine Mediterranean Gulls west and four more lingering of note.