A few migrants are starting to move now with a Little Ringed Plover, 150 Swifts and 17 Sand Martins overhead and , two Willow Warblers, a Sedge Warbler and 18 Yellow Wagtails on the land.
A Marsh Harrier was hunting over the Long Pits.
Two juvenile Yellow-legged Gulls were feeding at the Patch.

At least 12 Porpoises were sen offshore in flat calm conditions.

The two Red-eared Terrapins were sunning themselves at the Long Pits.

There were plenty of moths in the trap with the best being this Waved Carpet - only the fourth Observatory record. An example of the scarce pyralid Evergestis limbata was also trapped.

It is not very often that fish appear on the website but large numbers were sheltering from the sun in the shallows of the Long Pits this afternoon including these Roach.


Following on from the addition of Yellow-wort to the Observatory plant list there are now 34 plants flowering along side the access track to the Observatory. However, a look through the power station fence here revealed a colony of 1000's of plants. 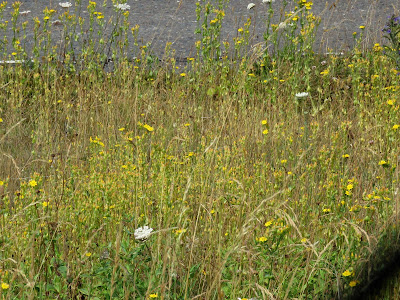