Less coverage today but an early morning seawatch produced 160 auks west and the Caspian and Glaucous Gulls were still present.

Two Firecrests were seen at the Long Pits.
The moth trap was run for the first time this year and produced a Chestnut and a Beautiful Plume and more interestingly one of  the rarer diving beetles, Dytiscus dimidiatus. 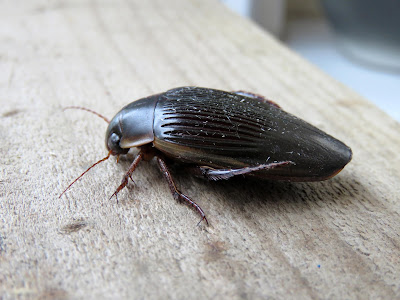 Note the lack of a bright orange/yellow border to the wing cases and thorax and the uniform orange-brown underside.
at 08:02
Newer Post Older Post Home
Tweet to @DungenessBO