The recording area is not noted for its uncommon or rare breeding species of butterflies but it more than makes up for this in terms of abundance. Common Blues, Small Coppers, Gatekeepers and Meadow Browns can all occur in very large numbers. Small Copper and Small Heaths, and to a lesser extent Common Blue, also appear in several broods through the year. Small Coppers can also appear in a number of named varieties including radiata, extensa, remota and schmidtii. 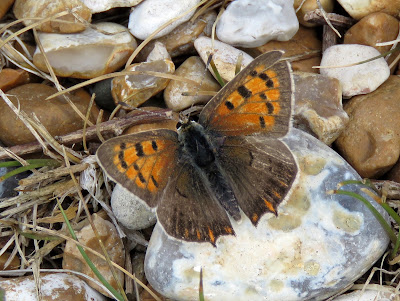 Some species, notably Holly Blue, tend to only occur when numbers at the national level are high..
Grizzled Skipper also occur in variable numbers, although always low, and are usually one of the first species to appear in the spring.

Over the last 25 years several species appear to have colonised the area. The most obvious example of this is the Marbled White. This butterfly was almost unknown in the area until 1991. Numbers have since increased so that it is now a very common insect in certain areas. The best areas to look for this species are around the Old Lighthouse and on the rough ground in front of the Observatory. The Brown Argus is another species which has colonised the area but numbers remain quite small.

Dungeness is also well situated the receive migrant butterflies and Clouded Yellows are recorded in most years along with large numbers of Large Whites and Red Admirals and smaller numbers of Painted Ladies. The highlight of 2001 was the all too brief appearance of a Monarch on 13th October, the first Dungeness record. A Large Tortoiseshell was the highlight of 2005 and 2018 and two were found in 2020. Swallowtails have been seen in 2005, 2006 and 2014. Long-tailed Blues were seen in 2013 and 2015.

See below for a list of Butterflies occurring at Dungeness