Rabbits and Foxes are seen on most days throughout the year. Brown Hares are regularly seen and Stoats and Weasels are less frequently seen. Badgers are occasionally seen after dark and even visit the Observatory garden at times. Both Pigmy and Common Shrews are present along with Bank Vole and Wood Mouse. Most of the more interesting mammal records involve bats and marine animals. 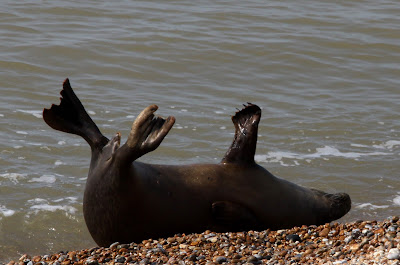 Some work has been carried out recently on the bats of the area and Nathusius's Pipistrelle and Whiskered Bats are now known to occur regularly. Common and Soprano Pipistrelles are also frequently recorded and there are occasional records of Daubenton's and Liesler's Bat.
In recent years there have been several sightings of White-beaked Dolphins and Harbour Porpoises have become an almost daily feature.

The only snake found in the area is the Grass Snake. In early spring they can often be seen basking on the short turf of the Moat or on the banks of the Long Pits. Later in the season most sightings are of individuals hunting amongst the emergent vegetation of the pits.
Common Lizards are frequently seen in the drier areas and even in many of the gardens.
Newts are represented by the Smooth Newt. Although common in the surrounding area, Great Crested Newts are not found at the Long Pits.


Common Frog is not common and Common Toads are occasionally seen but the commonest amphibian by far is the large and very noisy Marsh Frog. The first individuals of this species were originally introduced into Britain into a small garden pool at Stone-in-Oxney in the winter of 1934-35. Since then the population has increased and spread dramatically and they can now be seen or heard in many ditches and pools throughout Romney Marsh.