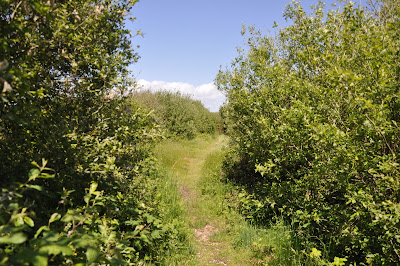 Species such as Bogbean Menyanthes trifoliata disappeared in the mid 1960s and other plants, including Marsh Cinquefoil Potentilla palustris (not seen since 1984, in what was one of the last few sites in Kent) are vanishing each year. Both of the two nationally rare species recorded, Stinking Hawk's-beard Crepis foetida and Least Lettuce Lactuca saligna, have disappeared now, the former from its last native site in Britain (although a reintroduction programme is now underway). On the plus side, many new species are recorded each year, some of them aliens or casuals, but including some nationally scarce native species such as Bur Medick Medicago minima, found for the first time in 1985. The total of 23 nationally scarce species (at least 7 of which were still present in 2000) is very high for such a small and heavily disturbed area. The total of 65 locally scarce species (at least 22 still present in 2000) includes a good population of Lesser Water-plantain Baldellia ranunculoides, which is almost unknown elsewhere in Kent, and an abundance of specialist shingle heath species such as Shepherd's Cress Teesdalia nudicaulis and Sheep's-bit Jasione montana. It is interesting that the total number of species recorded in each decade has apparently remained fairly constant, despite the loss of 46 species in the 1970s and 40 in the 1980s (note that in the 1950s recording was not as comprehensive as in subsequent decades).
To download a copy of the systematic plant list please click here.

If you find any new species for the area, or fill any gaps for the species in the 2000s, please leave the details, preferably with a rough grid reference for any new species with the Observatory Warden.